The World Ends With You
Register
Don't have an account?
Sign In
Advertisement
in: Characters, Game Masters, Reapers,
and 3 more

"It's a dog-eat-dog world. A logical hierarchy much like the food chain. The strong reach the top and win the Game, while the weak are left behind, the heels of the proverbial loaf."

Yodai Higashizawa (東沢 洋大, Higashizawa Yōdai) is a character in The World Ends with You, and a Reaper Officer. He's a minor antagonist in the main story and the main antagonist of Another Day. He is the Game Master during Shiki's chapter.

His Noise form, Ovis Cantus is a giant, bipedal ram with wings.

Higashizawa is a dread-locked giant. For unknown reasons, his left eye is yellow. He wears a grey jacket with a camoflouge design, a necklace, a belt with a large ram skull, blue jeans, and black-and-green shoes.

"A 20-year-old powerhouse overflowing with power and ferocity, Higashizawa can shatter concrete with his fists alone. Although physically dominating, his emotions often get the best of him." 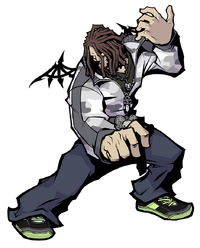 Higashizawa is an intelligent young man. He believes it's a dog-eat-dog world where the strong survive. He has a soft side among the group, as he gets very emotional very quickly. He and Minamimoto didn't get along very well. He takes great pride in his overwhelming strength and ability to split the ground in two. After being defeated, unlike the other game masters, he congratulates the players before being erased.

He also speaks with constant references to food. When he is in a battle, he has several quotes such as "Time for a taste test" or "I'll pound you!" This most likely shows that he treats his battles like he is cooking a meal.

He chose to follow tradition and wait until late in the game to make his appearance in the game, as opposed to Minamimoto and Konishi who both revealed themselves to the Players early on. He is shown to be the only high-ranking officer (Gamemaster and up) to regularly don reaper wings, while most others only reveal them when converting to Noise forms.

In Another Day, Higahizawa initially plays the role of an overly flirtatious booth babe. But in actuality, he is a part of the Black Skullers. However, he is very passionate towards Tin Pin Slammer and wishes to "purify" it instead of destroying it. His love of food is referenced by Rhyme calling him a "Great Chef."

During the first week of the Reapers' Game, Higashizawa acts as Game Master by proxy in the stead of Megumi Kitaniji with the promise of being promoted to Game Master officially if every player is erased. During this time, he sets his sights on Shiki, fascinated by her jealousy of Eri.

Higashizawa visits Neku and Shiki on the fifth day and informs Neku that he's dead.

On the sixth day, Higashizawa is given full Game Master privileges. On Day 7, he is defeated by Neku and Shiki. Before he is erased he congratulates Shiki on her growth.

In Another Day, he was formerly one of the original developers of Tin Pin Slammer along with Ken Doi (and presumably, Sho Minamimoto). After the failure of the (New) Solid Slammer line, he watched as Tin Pin Slammer became flooded with what he referred to as "generic, mass-produced fiascos" and became obsessed with "purifying" the game. He would ultimately side with the Black Skullers and serve as a "booth babe" at the Molco Slam-Off and took part in the pin theft that ensued.

When the Kindred Spirits finally caught up with the Black Skullers, he finally revealed that he wasn't on the Skuller's side either. He revealed the executive meddling that ultimately resulted in the (new) Solid Slammer's failure, and still held to his plan to purify Tin Pin Slammer. However, Sho Minamimoto arrived with a new Solid Slammer: Omega Kaiser Phoenix. With it, Shuto Dan was able to defeat Higashizawa. Only then did Higashizawa see the error of his ways, and returned to Tin Pin development along with Ken and Sho.

Higashizawa's relationship with Kitaniji is very formal. They both hold the other in very high regard. Kitaniji pushes for Higashizawa to get a promotion which causes Higashizawa to try harder in his work.

Higashizawa finds enjoyment out of Shiki's suffering. He is shown to have a great understanding of her past and uses that knowledge to cause for her more emotional pain. He describes the feelings of watching her negative emotions as if he were eating an enjoyable meal. In the end, he commends her for overcoming those negative emotions.

His Noise form is a giant, bipedal ram with wings called Ovis Cantus. He is an immobile boss. He does nothing except for inhaling (which absorbs Neku's psychs and prevents Shiki from attacking) until enough damage has been dealt, after which the screen will flash (at which point he is invincible), where he will say, "Now we're boiling!!" and start attacking.

The following is the Higashizawa-related item that the player can get in the game:

"A beefy Reaper boasting the strength to split the ground with a slam of his fists. Prone to emotional outbursts."

Higashizawa appears in two episodes in The Animation: The Reapers' Game and Erased. He first appears during the credits of The Reapers' Game reporting to Kitaniji in the Dead God's Pad that over half the Players have been erased at the end of Day 3. Minamimoto calls him a beast and Konishi and Kitaniji reprimand him for his rudeness and introduce him as the Game Master. Higashizawa promises to give Kitaniji a good Game; Minamimoto insults him as being a suck-up. Kitaniji says he got the Composer's permission to promote him on the condition to erase every Player.

His role in causing Shiki's emotional breakdown is omitted. Instead, this is done by a passing Eri. Additionally, Shiki is the one who reveals to Neku the truth of the Reapers' Game instead of Higashizawa.

In Erased, he reports to Kitaniji four Players remain and promises to erase them all. On Day 7 he fights Neku and Shiki. He references her envy, but Shiki declares she isn't ashamed anymore. Higashizawa transforms into Ovis Cantus. After struggling with Higashizawa's powerful attacks, Neku and Shiki begin a Fusion Attack. Neku is thrown into the sky by Ovis Cantus, but a large Mr. Mew cushions him, letting him bounce off him and reach Ovis Cantus. Using Sweet Talk Tether, he chains Ovis Cantus, jumps in the air, and makes the finishing blow using Flames Afar, Foes Aflame. Upon being defeated, Higashizawa reverts back. He apologizes to Kitaniji before being erased.

Community content is available under CC-BY-SA unless otherwise noted.