Wild Boar is the name of both the Brand and the pin. This article is about the Brand.

Wild Boar is one of the game's 13 brands. It represents the pig in the Chinese Zodiac (or the wild boar in Japanese Zodiac). Specializing in American style hip-hop and skater gear, this brand is popular with DJs.

The main store is located at the Udagawa Back Streets and is run by Kyo. As a result, Wild Boar is often the most popular brand at that district.

Wild Boar may be Beat's preferred brand due to its "Skater" theme, the fact that the store sells his stickers, and that most of the threads provide abilities specifically for him.

Wild Boar pins are designed with a graffiti influence and focus on dealing heavy damage in single bursts in both close and long range.

When all 5 Wild Boar pins that have line in their name are put together in order, they spell "HEAVY!". 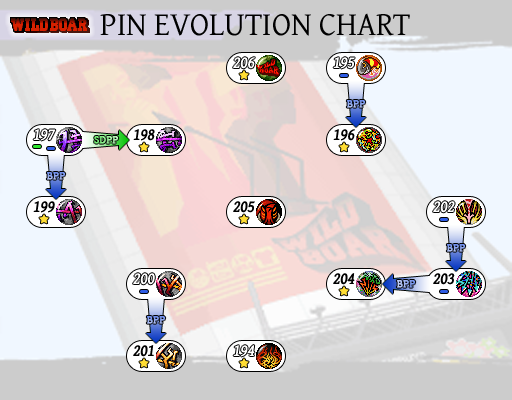 Retrieved from "https://twewy.fandom.com/wiki/Wild_Boar?oldid=41549"
Community content is available under CC-BY-SA unless otherwise noted.