Unknown; appears in battle as a Reaper

"I can't leave Shibuya like this. I have to change it. All Reapers deserve to enjoy their work. To feel rewarded!"

In The World Ends with You, Uzuki is a slender young woman with pale skin. She wears a gloved sweater that shows her navel, with a white corset and a pair of black denim shorts along with knee high white boots. The players call her "Pinky" because of her short pink hair and vibrant lipstick (though she's apparently touchy about this, telling Beat to "leave my hair out of this" the first time he uses the nickname to her face). She has large, black wings, signifying her inexperience compared to Kariya's small wings.

In NEO: The World Ends with You, her hair is longer. She now wears a suit: the pants and suit jacket are black, her dress shirt is white, her tie is pale blue. She wears a black bustiere with green laces. Her long, sharp nails are uncovered and painted a similar vibrant pink to her hair.

"An energetic 17-year-old girl. In front of Neku she acts tough and arrogant. Though she has a low rank among the Reapers, she is a perfectionist in every aspect when it comes to her occupation" 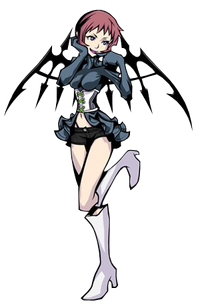 Uzuki Yashiro is the hotheaded partner of Koki Kariya. Unlike many of her colleagues, Yashiro is completely obsessed with her work. When she is restricted from working hard, it drives her crazy.

Yashiro is cruel and manipulative, such as when she falsely accuses Shiki Misaki of being a Reaper spy and tries to kill Shiki, all while having a smile on her face. Yashiro, like all of the Harrier Reapers, has a total disregard for the lives of Players. She values each competitor as little as trash or a Noise. This only aids her in her zealous demeanor. Though this is common among all Reapers, she takes it to a whole new level as she gets angry when Neku and Joshua saved her from the taboo noise, and later when Beat and Neku defeat her in a fight but chose not to erase her she gets even angrier and tries to get them to keep fighting even though it would have killed her. Both times Koki Kariya has to step in and calm her down.

Much of Uzuki's history is a mystery, although it is clear she has been working as a Reaper for two years. This implies she may have been a 15-year-old girl who won a Reapers' Game and chose to become a Reaper.

Uzuki appears several different times in the story. She first appears to taunt Neku and Shiki at the end of the first day. On the second day, she tries to manipulate Neku into killing Shiki, but is stopped by Sanae Hanekoma.

On the fourth day, she appears alongside Kariya, following orders from the Game Master to set a trap for the Players. Beat nearly falls into it, but is saved by Rhyme, who is erased as a result.

Uzuki's final appearance in the first week is when she and Kariya get a surprise visit from Beat. However, instead of seeking revenge for Rhyme, Beat wants to know how they can awaken Noise from pins.

Uzuki's first appearance in this week is right at the beginning alongside Kariya, where she gets angered when she gets a call from the new Game Master, who has issued orders for all Reapers to remain on standby. What adds to her anger is the fact that she already has little love for how he runs things.

On the second day, Uzuki and Kariya are investigating which Routes are open to them, as it seems the game master as sealed off a lot of them. Uzuki is still angered about being left on standby, and idly considers jumping over to the Realground to "recruit" a few new players. Kariya quickly reminds her that's illegal, but they are suddenly attacked. When that attackers turn out to be Taboo Noise, the creation of which is a capital offense, Uzuki calls it in. Later, Uzuki receives an anonymous phone call, which seems to be mostly gibberish. Later it's revealed the phone call was actually from BJ, although Uzuki herself never learns this.

On the fourth, due to the lack of missions, Uzuki begins to get bored. Kariya suggests they trail Neku and Joshua, which, on the fifth day, eventually leads to the discovery that Joshua is playing the Game while alive.

On the sixth day, she and Kariya are attacked by Taboo Noise, but can be saved by Neku and Joshua.

In the third week, Uzuki talks to Kariya about Konishi's position as Game Master and worries about making a good impression. It's shown that she is obsessed with getting promoted to officer rank. Later Konishi (who is going into hiding) contacts Uzuki and Kariya and tells them to try to erase Neku and Beat, promising to promote Uzuki if they succeed. She gives them a fake Rhyme pin to bait Neku and Beat. Neither Uzuki nor Kariya knows the Rhyme pin is fake.

On the third day, she confronts Neku and Beat, saying that Konishi made her the 'substitute Game Master' and challenges them to Reaper Sport 4. However, Beat accidentally sneezes loudly when she says what Reaper Sport 4 actually is. Unwittingly, the two fulfill the requirements of the game, following Uzuki through several areas. When the find her and their ignorance of the purpose of the game is revealed, Uzuki becomes enraged and reveals that it's tag. While she's ranting, Neku tags her and thus wins. Angered, she battles them and loses, retreating.

On the fourth day, after Kariya loses to Neku and Beat, both she and Kariya fight them but lose. They give the fake Rhyme pin to Beat, discovering that it is fake and that Konishi was playing them to buy time for herself. To apologize, Kariya gives them his keypin. Although bitter about the turn of events, Uzuki apologizes to the two for leading them on during the previous day. While talking to Kariya later, she is inspired by his words and decides to get promoted not for personal gain, but rather to benefit the lower-class Reapers who are used as pawns by the Officers. However, moments later, she and Kariya are possessed by their O-Pins.

On the fifth day, Beat and Neku encounter the berserk Uzuki and Kariya and are forced to battle them. While berserk, they are much stronger. Beat and Neku defeat them, but decide not to erase them and instead leave them unconscious on the ground. As a result, they survived the events of the week and are released from the O-Pin's control.

Uzuki herself does not appear in A New Day. However, a false version of her created by the Reaper Coco does appear and battle Neku and Beat. This Uzuki notably has a swapped personality with Kariya. She finds putting in too much work disgusting. At the same time, the illusionary Kariya is very driven to do well in his job like Uzuki.

In Another Day, Uzuki, Kariya, and Yodai Higashizawa host the tin pin slam off to steal everybody's pins. Here, she acts as if she was the boss such as when she scolds Yodai for rhyming multiple times. She is available to fight in a tin pin match. Also she leads a group of Prince fans, the Black Diablos much to the chagrin of Shiki who leads a rival group. Upon meeting in their tin pin match they both react to each other by (as Neku describes it) "wigging out" or making grunting and/or screaming sounds. She is surprised by Higashizawa's true intentions as she had planned to sell the stolen pins online. After the battles she is offered to join Shiki's fan club but instead decides to become "another 777 stalker", which immediately sets off Shiki to form a rival 777 Fan Club.

Uzuki returns with Kariya and Coco as part of the Shibuya Reapers.

She has a close bond with Kariya, who is always trying to get her to calm down and enjoy life. Despite her status, she remains incredibly arrogant and obsessive at all times. However, after confronting Kariya about turning down his promotion, he explains that the life of an officer is far too boring and that she should stop to "smell the concrete roses". After that, she relaxes a little and instead pledges to rise through the ranks to make the game more rewarding for all Reapers, with Kariya's help. She also shows a dislike in the way the higher ranked reapers use and manipulate the lower ranking ones.

Although the two women are rarely seen interacting, it is clear that Uzuki holds a lot of respect for Konishi and is trying to persuade Konishi (and Kitaniji) to give her a promotion. Konishi mentions that all Uzuki needs is some more self-restraint.

She and Shiki are fierce rivals, each being the leaders of rival Prince, and later, 777, Fan Clubs. Their rivalry is so fierce that Uzuki willingly foregoes the tradition of "The Boss Battles Last" to settle the score with Shiki in a game of Tin Pin Slammer.

Uzuki uses a gun to fight in battle, but like all Reapers is usually forbidden from directly erasing Players and must create Noise to fight. She can fire pink flower-shaped bullets from her gun that, after the initial hit, split up into multiple bullets and then merge again to do high damage to Players. She can also shoot a light blue flower-shaped bullet which swirls around and cuts the defense of the target upon contact, and is like a locked-on missile that follows you. She uses her wings to restore her HP, so don't leave her alone.

The following is all of the Uzuki-related items that the player can get in the game:

"A slightly clumsy Reaper who talks much bigger than her comparatively low station would normally allow."

Uzuki debuts in The Animation in The Reapers' Game. She confirms Neku and Shiki's pact, and taunts at the end of the first day. She convinces Neku to erase Shiki at the end of Day 2, but is foiled when Hanekoma intervenes and tells her its against the rules.

When Rhyme is erased, Uzuki also attacks Beat a little in response, while in the game, it was only verbal. After, she and Kariya go get hot dogs and are confronted by an upset Beat, disgusted by how inhuman and cruel they are.

Retrieved from "https://twewy.fandom.com/wiki/Uzuki_Yashiro?oldid=51765"
Community content is available under CC-BY-SA unless otherwise noted.