The World Ends with You: Final Remix

The game is primarily singleplayer-oriented, though Final Remix is unique in that it allows up to two players to engage in combat together in co-op mode. In singleplayer mode, the game can be played using either the Joy-Con controllers or the Nintendo Switch's touch screen. In the two-player co-op mode, two players use one Joy-Con controller each to control Neku and his partner in battle, respectively.[1] The player controlling Neku is also the one who controls party movement in the overworld, advances dialogue and text, controls the Phone Menu, and interacts with other game elements, such as scanning the environment, shopping at stores, and influencing Reaper Creeper.

This article is a stub. You can help The World Ends with You Wiki by expanding it.

A new story segment was added with about three days' worth of content. It can be unlocked by completing challenges on the final day of each week. The story follows Neku and Beat in an Expert Mode run by Coco Atarashi. It is much more difficult than the rest of the game, mostly due to new modifications on each battle that do things such as decreasing Neku's health or multiplying Noise. It also heavily teases a sequel, though no definitive announcements have yet been made about such a sequel.

The World Ends with You: Final Remix received "generally favorable" reviews on Metacritic getting a metascore of 77/100 based on 50 critic reviews.[4] On whatoplay.com, it receives an aggregate score (playscore) of 8.16/10 based on 36 critics.[5] 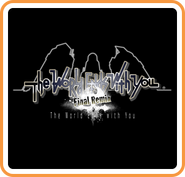 Placeholder Image from Nintendo Website
Add a photo to this gallery

Retrieved from "https://twewy.fandom.com/wiki/The_World_Ends_with_You_Final_Remix?oldid=44939"
Community content is available under CC-BY-SA unless otherwise noted.