Tenho (テンホー, Tenhō) is a Support Reaper and a member of 777's band, Def Märch, along with BJ. His appearance is identical to all of the other red-hooded Support Reapers.

During the investigation of who stole 777's microphone (during Week 2, Day 4), it is revealed that Tenho initially stole the microphone in order to stop BJ and 777 from fighting over who would be the band's vocals. Tenho was the one who called 777's cell phone, telling 777 to meet him at Cadoi City, in order to distract 777 so that he could steal the microphone and hide it. Unfortunately, the hidden microphone was later stolen by a certain someone, though 777 forgave Tenho because of Tenho's sincerity.

Tenho is terrible at Tin Pin Slammer, having never won even a single match. In order to obtain the "Lord of Tin Pin Losers" star to earn Week 2, Day 5's Secret Report, the player must lose a game of Tin Pin Slammer to him, intentionally or otherwise.

In Kingdom Hearts: Dream Drop Distance, Tenho can be competed against in Flick Rush in the Tin Pin Tournament along with B.J., 777, and Sho Minamimoto. 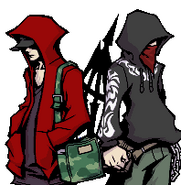 Tenho in the DS version

Tenho, BJ and 777 in The Animation
Add a photo to this gallery
Retrieved from "https://twewy.fandom.com/wiki/Tenho?oldid=52346"
Community content is available under CC-BY-SA unless otherwise noted.