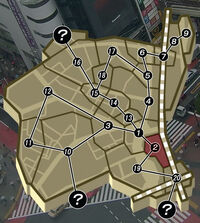 Like many of the other districts, it is based off a real world location. Hachiko was a real world Akita breed dog who inspired commemoration in statue form by loyally waiting at the Shibuya train station for his master to return every day. Even after his master's death (unbeknownst to Hachiko), Hachiko continued his tradition of daily waiting for nearly a decade. The statue plays an important role in the story as a gathering place for players looking to make pacts.

On the first day of the Game, Neku gets chased out of the Scramble Crossing by some frog Noise. At the statue, he meets Shiki, who wants to make a pact with him. Neku agrees, and the two are bound together for the week. They later return to remove a curse from Hachiko which is revealed to be some Noise. The Noise is disguised as the statue and is only revealed after a layer of some sort of substance is rubbed off it. After defeating the Noise, Uzuki Yashiro appears and Neku and Shiki meet her face-to-face for the first time in front of Hachiko. She nearly gets Neku to kill Shiki, but Sanae Hanekoma intervenes and Shiki is saved. He gives them the pin required for Fusion in front of the statue.

Towards the end of the week, when it seems that both Neku and Shiki will win the Game and be returned to the Realground, they arrange to meet in front of the statue, as Shiki will be returned to her real body.

To start his second entry into the Reapers' Game Neku returns to the statue to find a partner. Upon arriving at the Statue of Hachiko, he gets attacked by crab-like Noise but is saved by the arrival of Joshua, who formed a pact with Neku before Neku realized he was there.

During the week, Joshua and Neku can visit the statue to discuss the history behind Hachiko's Statue. Joshua notes that Hachiko often received food during his waits, even after his master had passed away, and brings up questions about whether it was his master or the free food that had really inspired Hachiko's interest.

In the third week, all of the other players are removed as Neku's entry fee. Neku, desperate for a partner, again waits by Hachiko. He meets Beat there, and Beat gives up his rank as a Reaper to become Neku's partner.

At the end of the game, Neku, Beat, Rhyme and Shiki meet up at Hachiko in the RG.