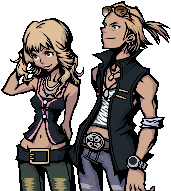 Sota Honjo and Nao (Nao-Nao "for short") are both players in the game and a romantic couple. Their death is a mystery, though they must have died between Week 1 and Week 2, for they are seen as living humans in the street talking while Makoto tries to sell the Red Skull pin in Week 1, Day 6. By scanning people during Shiki's chapter, it is revealed that a tanned girl with blonde hair is a suspected criminal; this could possibly refer to Nao, but as the detective himself says, there are many other ganguro in Shibuya.

Sota and Nao have personalities that reflect their looks. Sota is a punk with a hero complex, and Nao is the stereotypical perky ganguro girl. Nao is outgoing, but hides behind Sota when she finds fit. Both show that they are tenderhearted and assist Neku with opening himself to others.

Nao first appears on Week 1, Day 4 as a fangirl crowding around The Prince in Ten-Four but Sota and Nao together are encountered, as living characters, by Neku and Shiki during the promotion of the Red Skull pins. However, in the Tin Pin Slammer Challenge on the second day of Week 2, they are encountered as Players. When Neku loses the challenge, Sota goes on to win it after Joshua secretly breaks Shooter's pin launcher, therefore completing the mission for that day.

Later, on the fourth day, Neku and Joshua run into them again. Here, Neku tells them about Shiki being his entry fee. Nao and Sota convince Neku not to give up hope, and that he must truly care about Shiki to go through so much for her. They then give Neku the Tin Pin Gold that they won from the challenge on Day 2. On Day 6, when the Taboo Noise attack players and reapers, Neku and Joshua witness Nao being erased. They jump in to save Sota from the same fate, although they know this is impossible, as a player can only exist in the UG for seven minutes without their partner. Sota disappears with just enough time to tell Neku not to blame himself.

Despite their minor role, Sota and Nao are extremely important to the resolution of the story, as their conversation with Neku on Day 4 is what first triggers his shift in philosophy and ultimately leads to the Composer's decision to spare Shibuya.

Retrieved from "https://twewy.fandom.com/wiki/Sota_and_Nao?oldid=44147"
Community content is available under CC-BY-SA unless otherwise noted.