"When you mess up, at least make it interesting."

Shoka (ショウカ Shoka) is a Reaper in NEO: The World Ends with You, and is one of the Shinjuku Reapers. 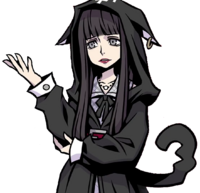 Shoka is a young woman with pale skin. She has long, straight black hair that reaches her waist and gray, droopy eyes, which give her a rather dreary look.

Shoka wears an oversized, hooded jacket that appears to be themed after Mr. Mew, complete with cat ears and a tail. Unlike the original Mr. Mew, however, this version has a golden hooped earring on the left ear. The jacket is held closed with a red belt with a silver buckle cinched around her waist. The hoodie is a signature piece from Gatto Nero, a new brand that has recently taken Shibuya by storm.

Beneath her jacket, she wears a gray plaid sailor dress with a black bow on her chest. Her jacket sleeves end in white cuffs, and her dress is hemmed with ruffled eyelet lace. She also wears white crew socks with pink and black stripes and black, hightop sneakers. Shoka also wears a necklace and red lipstick.

Shoka is less than enthused with her job of monitoring the Players. Having grown bored of the Reapers' Game in its current state, she not-so-secretly hopes someone will come along and shake things up, showing open disdain toward Players who are slow to learn the rules, such as when she calls Rindo and Fret "dummies" and "bozos" when they unaware of the UG. She frequently derides players for not knowing the rules while simultaneously explaining the ins and outs of the game, and seems to have a rather blunt personality.

Shoka serves as an initial guide to Rindo and Fret, explaining the game to the two and connecting them to the RNS.

Retrieved from "https://twewy.fandom.com/wiki/Shoka?oldid=51799"
Community content is available under CC-BY-SA unless otherwise noted.