In The World Ends with You, Shibuya is introduced as the site of a contest known as the Reapers' Game in an parallel dimension known as the Underground. Before the events of the game, the Composer of Shibuya, Yoshiya "Joshua" Kiryu, felt that humanity was becoming increasingly corrupt and clouded, and wanted to erase Shibuya from existence. Joshua's Conductor, Megumi Kitaniji, agreed, but wanted to at least save its streets and architecture. Joshua made a deal with Kitaniji to see if Kitaniji could reform Shibuya in a way that pleased him, so Kitaniji planned to brainwash humanity into a forced harmony by stripping them of their individuality. Meanwhile, Joshua decided to use a player named Neku Sakuraba to be his proxy. In the end, Kitaniji lost the deal and was erased. Seeing how Neku could not shoot him, Joshua decided to let Shibuya continue.

Not long after the first game, Angels decided to purify Shinjuku and so the city was erased from existence, with Tanzo Kubo as the Executor to carry out the purification. Being an overachiever, Kubo decided to purify Shibuya as well, although Rindo Kanade and the Wicked Twisters were able to stop him with the aid of Shinjuku's Composer, Hazuki Mikagi.

As many of the locations in Shibuya are protected under copyright, The World Ends with You often modifies these names. For The Animation, the team chose to go out and try to get the licences for nearly all of the locations that appeared. This also carried over to NEO: The World Ends with You[1]. However, the development team was still did not get permission for every location so a select few were still renamed. 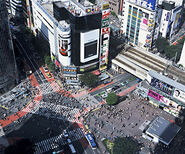 An overhead view of the Scramble Crossing

The Statue of Hachiko

The Scramble intersection, as seen from Hachiko

Typical crowd at the Scramble Crossing

The Udagawa Mural in real life, preserved with care