The World Ends With You
Register
Don't have an account?
Sign In
Advertisement
in: Players, Wicked Twisters, Main Characters,
and 2 more

Player
Leader of the Wicked Twisters

"Same vision as the one I had yesterday... Is this the future?"

Rindo Kanade (奏 竜胆, Kanade Rindō) is a Player, the leader of the Wicked Twisters and the main protagonist and playable character of NEO: The World Ends with You. After an incident at the Scramble Crossing, Rindo was entered into the Reapers' Game, along with his friend and classmate Fret.[1] 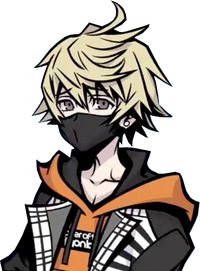 Rindo is a high school student with sideswept blonde hair with a prominent curl on top, pale brown eyes, and pale skin. His orange hoodie is Jupiter of the Monkey brand, similar to Neku Sakuraba. His knee-length, half-sleeved jacket is black with white accents. The patterns on his jacket include checks, plaid, and both horizontal and vertical stripes. He wears light blue ripped jeans rolled up to the mid-calf and white sneakers. He wears white stud earrings.

Rindo also notably wears a black cloth facemask which he claims is for fashion. From an out-of-universe perspective, it also denotes the fact that he doesn't say the words that are hidden inside him. The mask is a parallel to the previous protagonist (Neku) wearing a symbolic item on their head to represent an aspect of their personality as a sense of distancing from other people.[2] Specifically, Rindo prefers communicating through texting instead of speaking to other human beings face-to-face.[3]

Rindo is a heavy social media user, and searching for info on his phone is second nature to him. He prefers to go with the flow, and although he doesn't go out of his way to interact with others, he won't turn them away if they come to him first. He keeps his friends at arm's length, even Fret, but he lets his guard down around his online gaming friend on FanGO named Swallow of three years. He has a cautious personality and tends to survey situations before acting, but won't hesitate to get involved if necessary.

Rindo may also be perceived as not being terribly intelligent and lacking some self-confidence. For example, at one point, he finds a riddle "A = 1, C = 3, G = ?" While the answer is obviously 7, Rindo's instinct is to ask Swallow for confirmation because of his second guessing, instead of talking about it with his teammates, showing how reliant he is on his phone and how he has bonded with Swallow over Fret.

He is quite deadpan, though not unkind, and typically remembers at least basic manners. He seems slightly apprehensive about crowds, and often remarks how busy Shibuya is. Since he is a bit passive by nature, he mostly goes along with what others suggest before making an effort to decide on his own. He sometimes gets fed up with Fret's antics, even showing some passive-aggressive behavior at times, though he also clearly cares about his friends and will protect them as best he can. His mellow subdued nature contrasts Neku's, and while he is concerned about getting back to life, he does not seem too upset about being dead as much as a typical human being would.

Rindo and Fret attended the same high school, and established a friendship prior to their first in-game meeting in Shibuya. He seems to have a decent relationship with his parents and mentions them a few times during the first few days of the Reapers' Game, like when he tried to text them so they wouldn't worry after he failed to return home, and he recalls that he was supposed to buy something for his mother when Fret first uses his Remind ability.

After texting Fret and making plans to meet up at 104, Rindo makes his way over and is gifted a Reaper Pin by his friend. After dropping it, he receives it back from a passerby, and remarks that it doesn't really seem special. The duo grab lunch together, where Rindo is contacted by his FanGO friend, Swallow, who is also in Shibuya, and points Rindo in the direction of an in-app monster he wanted to catch. Rindo and Fret proceed to try and go catch the monster and potentially meet up with Swallow, but the plan is quickly derailed when they inadvertently enter the Reapers' Game.

Initially thinking the colorful explosions and fighting must be some sort of movie set, the two realize that the danger might be more real than they thought. Rindo is suddenly struck with a vision of Shibuya in ruins, though he snaps back to the present moment. He and Fret attempt to run away, and Rindo feels a sense of deja vu. As they flee, Fret is crushed by a truck thrown by a stray Noise, leading Rindo to scream in shock and horror as he is suddenly transported to a green, void-like space. After this, time rewinds, and Rindo is once again standing with Fret in front of the fight. This time, he guides Fret in the opposite direction of the truck and is able to prevent him from getting crushed. After this, they enter the Reapers' Game more directly.

On Day 1, they encounter Shoka Sakurane, who sets up the RNS or "Reaper Networking Service" for them, and Susukichi, who explains scanning and fighting Noise. He solves Day 1's puzzle with Fret, but on their way to defeat the target at Shibuya Hikarie, Fret gets them into an overwhelming Noise fight. Sho Minamimoto rescues them and berates them for their weakness. While Fret idolizes him and thinks of him as a new teammate, Rindo is apprehensive about Minamimoto's help. They defeat the boss, but their team isn't mentioned in the results. After Minamimoto, Shoka, and Fret leave, he texts Swallow and hopes to meet up again before going home.

On Day 2, Rindo wakes up in the Scramble Crossing, shocked he can't go home. He and Fret meet Tanzo Kubo, who taunts them and explains if they win at the end of the week they'll be granted a wish. Rindo meets Kaie Ono, who teaches him about the workings of the Underground. Rindo, Fret, and Minamimoto find the graffiti across Shibuya, Fret awakening his Remind power when he makes Rindo remember something his mother wanted him to buy. While on their way back to 104 Building to finish the mission, a broadcast from Shiba reveals Fret renamed their team from "Rindo's Group" to the "Wicked Twisters", starting an argument between a boisterous Fret and Rindo, who thinks the name is cringey. He summons the boss by beating his chest and roaring in front of 104. He, Fret, and Minamimoto defeat it, but they don't pick up the reward pin, which is picked up by Kanon Tachibana, claiming all of the points for the Variabeauties. Rindo tries to ask for it back, but a flustered Fret lets her have it. Shoka scolds Rindo and Fret for their laid-back underachieving and tells them they should try to get a Player that just entered the Game to join their team.

Like most players, he can generally only use one psych at a time, but is not limited by pin type. He is capable of reading other's thoughts, like all other players.

He is also capable of Replay: Rindo can travel back in time on a given day and change his actions for a better outcome. It seems that this ability does not keep his memories fully intact, and he may only have a strong sense of deja vu in certain cases. Rindo first awakens to Replay after witnessing Fret being crushed to death by a truck.

He and Fret are friends and classmates; they mostly spend their time outside of school roaming Shibuya together, though Rindo still keeps him at arm's length. Fret nicknames him "Rindude", makes Rindo talk verbally, and elected Rindo as leader of their team, the Wicked Twisters, due to his easy-going attitude. He is far more outgoing than Rindo, and seems to draw him out of his shell a bit. At the same time, though, Rindo sometimes seems a bit annoyed by Fret's boisterous personality and attempts to get him involved in various antics. Regardless, Rindo obviously cares a lot about Fret, and works together with him to survive the Reapers' Game together.

Rindo respects and appreciates Minamimoto for the help he gives to the Wicked Twisters, calling him Mr. Minami. He can get confused by Minamimoto's math metaphors, often having to look them up on his phone and translate it for Fret. However, he has a feeling Minamimoto has ulterior motives for helping them.

Swallow is Rindo's online friend, and is the only person Rindo lets his guard down around. They play FanGO together, and often give each other pointers on where to catch monsters on the app. The two have never met in person despite both frequenting the Shibuya area.

奏 Kanade literally means "to play an instrument". 竜胆 Rindo is the name of the gentian flower, but the kanji literally mean dragon and courage.

Community content is available under CC-BY-SA unless otherwise noted.