Unknown; presumably between 10 and 13

Raimu Bito (尾藤 来夢, Bitō Raimu), nicknamed Rhyme (ライム, Raimu), is a supporting character in The World Ends with You and serves as Beat's partner during their first Reapers' Game.

“Rhyme's earnest and hard-working attitude proves a big help to Neku and Shiki early on, as well as to her partner, Beat. She has an addiction to adages and no shortage of smiles, and without her, the others would be lost.”

While Beat acts aggressive and impulsive, Rhyme balances him out with her calm demeanor. She is always wearing a smile and is kind to everyone she meets. Always optimistic and reasonable, Rhyme manages to keep everyone organized when she's around. Her young and pure heart is impossible to hate and gives her great love and loyalty. She has no dreams except to help Beat achieve his (becoming the best skateboarder in the world).

It is interesting to note that in the Japanese version, Rhyme refers to herself with "ボク" (boku), a masculine personal pronoun that is normally used by boys, occasionally used by tomboys, and sometimes used in song lyrics even when the singer is female.

When her brother, Beat, ran away from home, Rhyme soon followed. However, both siblings died when Beat tried to save her from being hit by a car, and ended up having to play the Game.

Beat and Rhyme met up with Neku and Shiki on the second day. Though they planned to team up, Neku's antisocial inclination combined with Beat's competitive spirit kept both teams separated. Nevertheless, both sets of Players developed a close bond and agreed to assist each other. Later, on the third day, Rhyme and her brother completed the mission by erasing a small golden bat Noise that Neku and Shiki had missed due to being focused on defeating a larger, stronger one.

On the fourth day, the mission became far simpler--a simple movement to another area with no time limit. Unfortunately, the ease of the mission was a ploy to lower the Players' guard and place a trap: a powerful, hidden shark Noise. Beat, while fooling around, stepped on the shark's sigil, summoning it. Mirroring the way Beat had tried to save her before they'd died, Rhyme pushed her brother out of the way and was Erased instead, leaving only her favorite pendant.

Her lingering soul was bound to a pin by Sanae Hanekoma (a.k.a. Mr. H), from which her Noise could be summoned. This pin is obtainable in Week 3, Day 7.

Her memories and love of Beat were stated to be Beat's entry fee, though Beat first assumed it was Rhyme's instead (which comes as a shock to him). She does recall that she had a brother and worries about him, but cannot connect this to her partner, whom she believes to be a kind stranger. This fact tore Beat apart inside, so he resolved to win the Game and restore Rhyme's memories.

She came back to life at the end of the Game and was seen with Beat, Neku, and Shiki. However, the Secret Reports stated that since she had technically lost the Game, her entry fee was non-refundable, and so all of her previous dreams and ambitions were likely erased forever. However, because Beat won, her memories and love for him were returned.

She is the only known Player to have had both a human form and a Noise form. Reapers (notably the Game Masters) and Mr. H are the only others known to have this distinction.

In the alternate reality of Another Day, she and Beat were a stand-up comedy duo who performed at A-East. However, she broke things off because Beat had no confidence in his material and settled for the audience laughing at his panicked facial expressions. When he chose to take up Tin Pin instead, she joined the Black Skullers, hoping that getting rid of the distraction would help him focus on comedy again.

As a Noise, Rhyme appears to be a small, pink mammal, possibly a flying squirrel or sugar glider. [ ? ]  Her fur is the same salmon pink color as the skull-and-crossbones shirt she had worn as a human. The signature sigil-like parts of her body are her arms, "wings," and tail, transitioning from a watermelon-like red to stark black.

She is integrated into Beat's conversation sprites for most of Week 2 and the beginning of Week 3, often perched on his shoulder or head. She seems to be attuned to Beat's emotions, often mimicking his posture or expressions during conversations. It is never made clear precisely how much of Rhyme's consciousness is active in her Noise form; regardless, Beat is extremely protective of her.

As Pin 262, Rhyme will fly onto to tapped-on empty space to inflict damage on any enemies present nearby, then immediately glide offscreen.

Rhyme is Beat's younger sister. As her memories of and love for Beat were his entry fee for the Game, Rhyme is unaware that Beat is her older brother. However, she still trusts and is quite close to him. Given her willingness to even run away from home with him, it is evident that she was also very close to him prior to their deaths.

She is impressed by Neku's mastery of psychs, and is much more patient with him than Beat is during the first week. She quickly forms a friendship with Shiki and Neku, although she prioritizes her relationship with Beat (ditching Neku and Shiki during a conversation when Beat runs off). She also provides some intel about the Game to Neku and Shiki.

Rhyme and Shiki quickly became friends, connecting over their partners' similarities and a conversation about Rhyme's pendant, as Shiki was enthusiastically surprised that she had the covetous pendant at all, given its rarity, but Rhyme expressed that she would've given Shiki it, had it not been a gift from her brother.

Shiki was very distraught over Rhyme's death, and berated Neku for not showing the same empathy for Rhyme and Beat.

The following is all of the Rhyme-related items that the player can get in the game:

The kanji of Rhyme's Japanese name, Rai-Mu Bi-Tou, translate literally as coming, dream, end, wisteria. This may be a reference to her hopefulness and tragic end. Her nickname, Rhyme, could be a reference to names of beings in the game being attuned to sound or music. It is also possible that Beat and Rhyme's nicknames together could be references to the major elements in rap music. 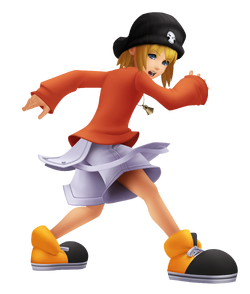 “Sometimes memories just need a little help getting out.”

— Rhyme explains to Sora that she isn't bothered by losing her memories.

Rhyme makes an appearance in Dream Drop Distance. She appears in Sora's version of Traverse Town, missing most of her memories and lacking her partner Beat. When the Dream Eaters attack her, Joshua temporarily removes her from existence to save her.

She later reappears in Riku's version of Traverse Town, remembering everything about herself and helping Beat fight off weaker Dream Eaters to allow Riku the time needed to slay the Spellican.

Rhyme's voice actress is Ayana Taketatsu instead of Hitomi Nabatame in the Japanese version, and Ashley Rose instead of Kate Higgins in the English version.

The World Ends with YouEdit 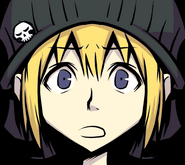 Rhyme in the opening cinematic

Rhyme while stating she does not mind when her memory returns 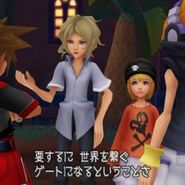 Retrieved from "https://twewy.fandom.com/wiki/Rhyme?oldid=45787"
Community content is available under CC-BY-SA unless otherwise noted.