Throughout the process of localizing a video game from one language to another, a number of regional differences can appear. Besides changes in the script to befit the target audience and culture of a particular region, changes towards other elements of the video game, such as art assets, references, and game mechanics, can also be made for various reasons. This article goes over the regional differences found in The World Ends With You, from the original Japanese version[1] to the North American and European versions, and NEO: The World Ends with You.

The World Ends With You[]

The soundtrack had some music tracks replaced as follows: 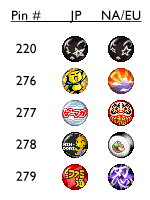 NEO: The World Ends With You[]