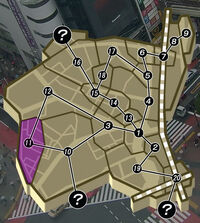 In the first game, it connects to Dogenzaka, the Concert Stage, and Shibukyu Main Store. There is only one store here: Lapin Angelique.

In the second game, it connects to Dogenzaka and the 104 Building. It has Cony×Cony and Tigre Punks stores.

A-East first appears in Shiki, Day 2. Shiki and Neku receive the mission to "defeat the master of A-East" when they wake up in the Concert Stage. 777 waits outside for the technician Futoshi to return with a fuse, which he will, and possibly with cough drops. If 777 receives cough drops he will give Lucky Star to Neku and Shiki. The master of A-East was a small golden bat that appeared after defeating Vespertilio Canor that Beat and Rhyme defeat. After this, Neku, Shiki, Beat, and Rhyme agree to team up.

In Joshua, Day 3, Makoto Miki and The Prince argue over The Prince's terms for his Shadow Ramen review. Makoto provided him with text and pictures to use, but the Prince wrote his own review. The Prince gets possessed by Negative Noise over this.

Konishi runs into A-East during her hide-and-seek mission in Beat, Day 2. 777 attacks Beat because of the bounty on his head due to the Emergency Call. When Beat wins, 777 asks for him to end him, but Beat spares him and tells him to play the sold-out Def Märch show that night. He gives Beat a keypin. 777 goes into the Concert Stage to try and prove nobody is in there, but gets erased by Konishi.

O-East first makes its appearance in The Reapers' Game. Its role is very similar to the one it had in the game's Week 1, Day 3. There, Neku and Shiki meet 777, and after defeating Vespertilio Canor and fixing the lights, 777 gifts Shiki a keypin. Neku, Shiki, Beat, and Rhyme agree to work together here.

In Emergency Call, Neku and Beat pursue Konishi to O-East. They see that the Def Märch show there has sold out. After confronting 777 in the Concert Stage and leaving, they hear Konishi erasing 777 outside.