The World Ends With You
Register
Don't have an account?
Sign In
Advertisement
in: Combat, Noise, Reapers' Game

Noise are the main enemies and battle fodder of The World Ends with You series.

They are a race of beings, summoned physical forms from a Soul bound to a Pin, incarnated between the Underground and Realground planes of Shibuya. Because they straddle the border between the two planes, they are able to exact an influence in both, being physically present in the Underground, while capable of influencing people's thought in the Realground, typically resulting in negative emotions on the victim's behalf. It is also shown that can manipulate people's temperatures, such as a Scorpion Noise's sting giving people chills.

Noise take on the form of an animal or mythical creature, colored in a wide variety of palettes. It is worth mentioning that the Noise at least has a part of its body lined with or replaced with tattoo-like patterns.

Information from the Secret Reports[]

All Noise are composed of Soul, just as all consciousness is in the Underground, and are born when Soul is bounded to the code of a Reapers' pin or the negative emotions of people. However, these monsters do not have any free will of their own and exist only to multiply and consume the Soul of people in the Realground by possessing them.

Even after they are erased, the Soul the Noise consume is destroyed permanently, but the freed human experiences a rush of euphoria...They exist on a special plane that is both on and in between the RG and the UG. Though the RG and the UG exist in the same space, the Noise plane is split into two separate spaces. Every Noise exists in both spaces at the same time, and though they share the same life force they can move around individually.

Role in The World Ends with You[]

In battle, each Noise typically has two incarnations, one on each screen. The two incarnations share HP, meaning that attacking the same creature in both screens simultaneously is a quick way to defeat single enemies.

However, some enemies have only a single incarnation on a single screen. Examples are:

If there is more than one Noise of the same type on each screen, the player can sometimes find out which Noise on the upper screen corresponds to which Noise on the bottom screen -- for example by using Joshua's locking ability. This proves useful for targeting one Noise at a time to eliminate it faster. 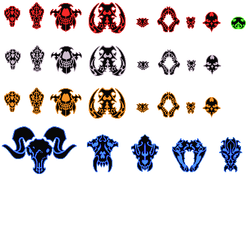 When scanning, the six different types of Noise symbols can be distinguished by their color:

Noise symbols float about a small radius awaiting a tap from the stylus to initiate combat. Taboo Noise are the exception to this rule as they will float towards Neku and force him into an encounter. If a Noise has already reached Neku, one can scoop up the Taboo Noise by dragging another Noise, and simply hold them there until the timer for battle-preparation expires.

In addition to their color, Noise symbols come in various shapes that vaguely resemble a Noise's skull, each shape typically holding a certain Noise combination depending on the location and day.

Noise possessing people drag down the emotions of the possessed. These Noise are also drawn to hotspots of negative emotions, creating a feedback loop of increasingly negative emotions. The ultimate result of this is unknown.

Certain powerful Reapers, those of Game Master rank or above, are able to transform into alternate Noise forms more suited for battle. Angels can take on Noise form in an identical manner.

Taboo Noise are especially powerful Noise. They cannot be born naturally and must be refined using techniques forbidden from Reaper knowledge; their creation is a capital offense according to Reaper rules. Whereas normal Noise cannot attack Reapers or Players with a Pact, Taboo Noise freely attack both. It is impossible to run from them, and they take much less damage from attacks than other Noise unless the attacker has the Light Puck.

Role in NEO: The World Ends with You[]