"I like the field, simple as that. You can feel the pulse out here. People's ideas conflicting, changing... I like bein' in the audience. I'm a stargazer."

Kariya is a muscled tall man with wavy orange hair, brown eyes, and pale skin. In The World Ends with You, he wears a grey zip-up parka vest with a white silhouette of a ribcage printed on it, slightly unzipped to show his white undershirt; pale pink-brown pants, and white loafers. A chain hangs from his pants' waistband. His parka can be collected as a Gatito thread, Lollipop's Parka.

In NEO: The World Ends with You, he wears a black vest with an unfastened belt with a patch on the right side of his chest of a skeletal hand squeezing a strawberry, open so it exposes his low-cut white undershirt with a dark grey silhouette of a skeletal torso. He wears light blue ripped jeans showing a bright red layer underneath, and white shoes with a black heel. His hair is shorter, and he now wears yellow-tinted glasses.

"Although he carries himself with a casual demeanor, he is considered to be the Reapers' "big brother". He always prefers to work beside Yashiro. Oozing confidence, this stoic perfectionist takes great pride in his work." 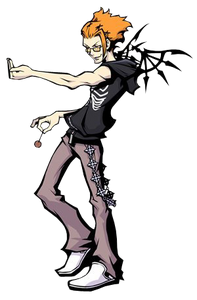 Although he's been offered several times to Officer-class, Kariya would much rather sit back and relax than exert effort in completing his assignments. Kariya explained to an enraged Uzuki that he declined a promotion because being an officer meant that he couldn't be out and about in Shibuya; he would only strut around looking important all day, a life he sees as boring. He is always holding a bean paste lollipop and is exceptionally cool-headed. The only times Kariya expresses any anger in The World Ends with You is when he found out that he was being used by Mitsuki Konishi for more time, and when he sees the first Taboo Noise.

In The World Ends with You, Kariya spends most of his time playing games with Uzuki which he usually wins. The loser of these games treats the winner to a bowl of ramen. They play these games even with serious subjects, such as finding out the origin of the Taboo Noise. He enjoys an easy, fun life, the exact opposite of his partner, Uzuki. Despite the differences in attitudes and goals, Uzuki and Kariya are friends and work incredibly well together, fighting like two halves of a whole[1]. The two even have their own special light puck, similar to Neku's (explaining why Uzuki and Kariya can take out the Taboo Noise, who can only be defeated by people who have a light puck).

Kariya spends a great deal of time telling Uzuki about the old days of being a Reaper, and seems to know more about the Reapers' Game than he lets on. For example, he both knew about Taboo Noise (curiously, Joshua does not, implying he might have been in the UG for longer than the Composer) and was able to predict what was happening to Shibuya (though it was too late, as he and Uzuki fell victim to the O-pin's mind control). Kariya also talks about how they have never had so many Games in a row, indicating that he has been participating in the Game for a long time.

Kariya appears often during the Game, although not as often as Uzuki.

He first appears to Neku and Shiki on the fourth day when he and Uzuki set a trap for Beat. Rhyme saves Beat from the trap and instead is erased. When confronted by Beat, Kariya mocks him by saying that Rhyme died only because Beat was too foolhardy to look out for her. He and Uzuki then retreat.

On the seventh day, Beat approaches Uzuki and Kariya, apparently to find out how to release Noise from Pins. Although Uzuki is not too keen to talk to Beat, Kariya wants to find out what he wants to know.

During the first day the second week, Kariya and Uzuki are discussing having Sho Minamimoto as Game Master. Although Uzuki dislikes Minamimoto's way of running the Game, Kariya likes it because it means they have less work to do.

On the second day, while he and Uzuki are finding out which routes are open or blocked by walls, they are attacked by Taboo Noise. After Uzuki calls the appearance of the Noise in to HQ, the two are tasked with investigating the Taboo Noise.

On the first day, Kariya and Uzuki discuss Mitsuki Konishi's appointment as the Game Master. Kariya notes that it will be hard for Uzuki to get Konishi to promote her. Konishi later tells Kariya and Uzuki to target Beat and Neku and gives them a fake Rhyme pin to bait them (although Uzuki and Kariya think the pin is real). Konishi promises Uzuki a promotion and notes that Kariya should have already been promoted.

On the third day, after Uzuki's defeat to Neku and Beat, he tells Uzuki his reasons for denying promotion and advises her to slow down.

On the fourth day, he directly confronts Neku and Beat. While they are asleep, he locks their keypins in several boxes, forcing them to unlock each box to reach the area he is in. After his defeat, he and Uzuki fight Neku and Beat simultaneously. He attacks Neku on the lower zone, while Uzuki fights Beat on the top zone. After their defeat, he gives Beat the Rhyme pin, discovering that it is a fake. To apologize, he gives them his keypin. While talking to Uzuki later, he helps her realize her true ambition: to get promoted not just for herself, but to benefit the lower-class Reapers being used as pawns by the Reaper Officers. However, right after this, both of them are possessed by their O-Pins.

On the fifth day, Beat and Neku find the possessed Kariya and Uzuki and defeat them. Instead of erasing them, they leave them unconscious on the ground.

This Day Ends with You![]

In This Day Ends with You!, Kariya, Uzuki, and Yodai Higashizawa host the Tin Pin Slam-off to steal everybody's pins. Later, Rhyme claims that Kariya stole all her pins, but this was a ploy to lure the "Kindred Spirits" into a trap. The Spirits later return, catching the Skullers in Miyashita Park. As the fourth battle, Kariya faces off against Neku, Kariya advises Neku to just go with the flow, then attempts to buy him off with ramen, to no avail. When Neku wins their Tin Pin match, Kariya congratulates him and asks him if he feels better now, which Neku confirms. After the Spirits win against the Skullers, Kariya leaves for ramen.

Kariya himself does not appear in A New Day. However, a false version of him created by the Reaper Coco does appear and battle Neku and Beat. This Kariya notably has a swapped personality with Uzuki. He finds his job effortless and thusly wants to do as much as he can. At the same time, the illusionary Uzuki finds the idea of promotion as a way to simply receive more work.

Kariya returns in NEO: The World Ends with You as one of the Shibuya Reapers, along with Uzuki Yashiro and Coco Atarashi. He and Uzuki have separated.

Uzuki has only been a Reaper for two years, and Kariya still calls her a "spring chicken," further implying that Kariya has been in the Harrier business for a long time. Kariya regularly turns down promotions because he enjoys hanging out with Uzuki while she in turn ruthlessly scrambles for advancement.

Often times when Uzuki is enraged, it's Kariya that calms her down. One method he uses is to create a small competition between themselves to do things like erase more players. Often times, the reward for these games would be the loser buying the other a bowl of ramen. This creates a much more playful attitude between the pair. He and Uzuki also share a special light puck that allows them to share their energy.

Kariya was constantly antagonizing Beat from the first time they met in Shiki, Day 4, erasing his younger sister Rhyme. He guilts Beat into making him feel responsible for her erasure, and taunts him with how he'll be erased in 7 minutes. He patronizes Beat when he approaches him and Uzuki in Shiki, Day 7 asking to be a Reaper, and during the week which he is a Reaper, nicknaming him Freshmeat. While Uzuki gets offended at Beat's mocking of other Reapers due to his special operation, Kariya ignores his insults and doesn't let it get to him. He threatens Beat when he plans to form a pact with Neku. When Kariya runs Beat, Day 4, he is genuinely upset that the Rhyme Pin he gave Beat for winning is fake, showing that while he mostly wants Beat as a Player and a Reaper erased, he cares about Game integrity.

Kariya is a powerful Reaper. Although he is a Harrier-class Reaper, he is at such a low rank by his own choice, even though he has been a Reaper for a long time and has been offered promotion to Officer-class on few occasions.

When in battle, Kariya is quite a formidable opponent. He can fire energy blasts from the air, which explode when they hit the ground doing massive damage to any nearby players. His normal attacks include shooting regular energy blasts that don't explode and shooting shuriken. He is also capable of creating an electrical barrier around him, countering close-range psychs such as Shockwave. However, blocking these moves is possible if the player is quick enough to attack.

The following is all of the Kariya-related items that the player can get in the game:

The kanji for Kari-ya Kōki literally translates to: Hunt, valley, arrest, sparkle. Like Uzuki, his name is also mentioned as containing a zodiac sign.

"A fit and free-wheeling Reaper who works alongside Uzuki. His laidback attitude belies a strong sense of pride in his work."

Kariya's role in The Animation is very similar, although he meets Neku and Shiki earlier on day one.

When Rhyme is erased, Kariya also attacks Beat a little in response, while in the game, it was only verbal. After, he and Uzuki go get hot dogs and are confronted by an upset Beat, disgusted by how inhuman and cruel they are. He saves Uzuki from Taboo Noise in CAT. In Turf (Episode), he notices Joshua is playing alive but lets it pass and gives him and Neku lollipops.