Player
Leader of the Variabeauties

"My eyeliner put up a real struggle this morning... ... but it looks like my luck has turned up - just like my wing tips."

Kanon Tachibana (立花 果遠, Tachibana Kanon) is a Player in NEO: The World Ends with You, and the leader of the Variabeauties.

Kanon is a slender woman with pale skin, short ginger hair, and brown eyes with salmon eyeshadow. She wears a purple crop top with long sleeves and exposed shoulders with a white broken heart shedding a tear on the chest. She wears baggy denim jeans with patterns of hearts, lips, stars, and planets on the thigh, and purple heels with a grey tufts of fur on the arch of her foot. She wears a black beret with a purple band and red diamond. She accessorizes with gold earrings shaped into three hanging diamonds, a white necklace with diamond shapes, gold bracelets on her left wrist, and red nail polish.

Kanon is kind to other people, like when she taught Rindo Kanade from another team the rules of the Game. Her charisma hides her cunning wisdom. Kanon does not have impressive psychic powers, so she survives the Game by being a skilled negotiator.

It is unclear how Kanon died. It is implied she, along with Motoi and Fuya, have been playing the Reapers' Game for at least seven months with at least 30 loops.

Kanon first appears at the end of the second day. After Rindo, Fret, and Minamimoto defeat the Go-Go Beringei, she finds and takes the reward pin it dropped, claiming the points for her team. She offers it back, but a flustered Fret lets her have it - she wishes the Wicked Twisters a fair fight and leaves.

Kanon does not have a major role in the story; throughout the days, she acts supportive of Rindo and his team, and although she knows their team must face off during events such as the Scramble Slams and some of her Variabeauties get erased, she realizes it's the reality of the Reapers' Game and does not blame him. During Week 2, she tries to team up with the Wicked Twisters to defeat the Ruinbringers. On Day 7, Kanon fights Tsugumi Matsunae on the roof, and although the team wins, Shiba Miyakaze forces the teams to play again.

On Week 3, Kanon cooperates with the Wicked Twisters as they are now on the same side against the Reapers. On Week 3, Day 3, Kanon gets possessed by a Plague Noise. Fret and Nagi try to rescue her using their powers, although it only releases her mind from her possession. She thanks the group for their efforts, especially Fret, before being erased.

立花 Tachibana is made from the kanji for stand up and flower. Historically, Tachibana was the name of two separate clans of samurai and kuge. 果遠 Kanon is made from accomplishment and distant. 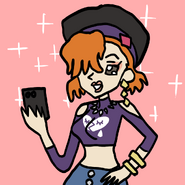 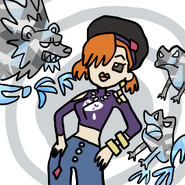 Kanon with Plague Noise in Remind
Community content is available under CC-BY-SA unless otherwise noted.
Advertisement