The World Ends With You
Register
Don't have an account?
Sign In
Advertisement
in: Lists, Queries, Brands

Gatito is the name of both the brand and the pin. This article is about the brand.

Gatito is the name of the 13th brand. It has no corresponding animal in the Chinese Zodiac but instead it represents the cat as 'gatito' means kitten in Spanish. There are numerous Chinese legends which explain why the cat did not make it onto the zodiac, most of them involve the rat tricking the cat in some way and because of this rats and cats are now mortal enemies. The Vietnamese Zodiac has a cat in the place of the rabbit.

Gatito has no "legitimate" shops per se (WildKat, run by Sanae Hanekoma, sells mostly food); all of Gatito's threads are sold at shops of other brands, mostly as quest items.

Their pins are unique in that most of them become more powerful when used in the same deck as all the other pins in the same set (Darklit Planets) or have no effect unless all the members of the set are present (Universal Ray, Speedy Cat, Irregular Note and Approaching Eden). Gatito has a pin set of each size from 2 to 6 pins.

Gatito threads are not unique designs, instead they are clothes obtained from the major characters in the game, or replicas of their clothing (e.g., Mr. Mew, various pieces of Minamimoto's clothing, Kitaniji's headphones etc.). These articles were obtained by a mysterious "buyer", who turns out to be CAT. Gatito's pins, on the other hand, were clearly designed by CAT himself (many bear images based on his graffiti). Other employees of the brand include Megumi Kitaniji (who commissioned the Red Skull pin and possibly others) and Makoto (who is likely a college intern).

In NEO: The World Ends with You, Gatito had been replaced by a new counterpart, Gatto Nero. 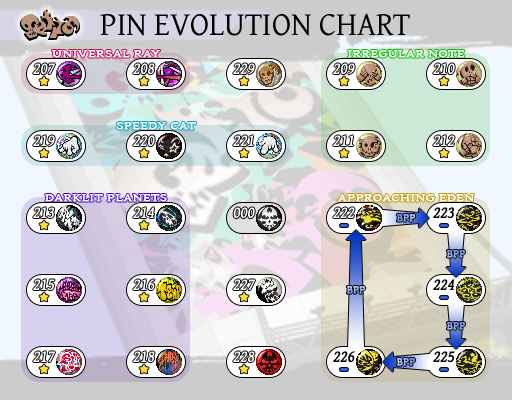