"Why do I have to sound so different from everyone else?"

Eiru (えいる, Eiru) is a character in NEO: The World Ends with You. He is a popular streamer and rising star who charms his audience with his unique, high-pitched voice. He is often mistaken to be a woman, which hurts his self-esteem. He only grew comfortable with his voice thanks to Eiji Oji, however, and now hopes to collaborate with him someday.

Eiru first appears on Week 1, Day 2, although no major significance is given to him.

He appears again on Week 2, Day 2 and he is the subject of an imprinting. Fret feels to help Eiru with his self-esteem, he should stop caring about what other people think of him, although Nagi is concerned that Eiru will become asocial, and thinks Eiru should find a healthier method. It is up to the player to decide to use Fret's or Nagi's method, although it has no major significance.

Eiru appears on Week 3, Day 2 with his manager and Eiji. Eiru is upset because Eiji apparently called his voice "detestable". With the group's help, Eiru discovers his manager misheard "delectable" as "detestable". 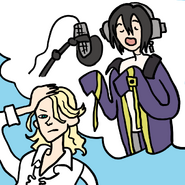 Eiru in Remind
Community content is available under CC-BY-SA unless otherwise noted.
Advertisement