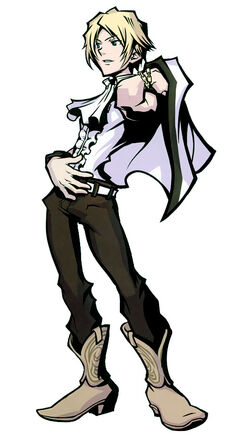 Eiji Oji (王子 英治, Ōji Eiji), more commonly known as The Prince, is a minor character in The World Ends with You.

Oji is a very popular celebrity who runs into Neku and his friends fairly often. He first meets Neku while he is shopping with Shiki inside 104, commenting that Neku should pay more attention to trends, and that Neku and his outfit is "like wrapping the rose of youth into a spicy tuna roll". Many of the girls in Shibuya admire and idolize him. He is also known as "The Prince of Ennui", and his blog, "F Everything", is said to receive 100,000 hits per day. As such, his influence over trends in Shibuya is considerable. He is one of the few RG humans given a predominant role in the plot.

According to mind scans of certain NPCs wandering around Shibuya, Oji has noticed that he sings a bit off key and has begun taking voice lessons (giving the inference that Oji is a singer by profession, though other mind scans reveal that he also apparently has a new TV show as well), although he quits his lessons in Week 3. Another Day, he even has a fanclub called the White Angels headed by Shiki.

In Week 3 he is one of the brainwashed people who can be examined.

Oji gives off the illusion of being snobbish and above most, but he is really very down to earth. He believes that he should use his popularity to help others while not caving into others' expectations and opinions simply to appease his fans. This is apparent when he first supports Makoto's Shadow Ramen on his blog "F Everything" but then withdraws it when Makoto wants him to post pre-written praise about Shadow Ramen, feeling that if he did so that his blog wouldn't be his anymore.

He really only wanted a simple ramen made with lots of love like that of Ken Doi's, who once worked for him under the name "Sebastian". Despite his many public appearances and his awareness of his popularity, he seems to take no offense from those, like Neku, who is unfamiliar with him.

In Another Day, Oji's pin deck is shown during a Tin Pin match against him. It's possible to have a rematch with him later, where you can see his second deck.

If you defeat Oji's second deck, he will reward you with Pin 264, Lady Luck.

Retrieved from "https://twewy.fandom.com/wiki/Eiji_Oji?oldid=49305"
Community content is available under CC-BY-SA unless otherwise noted.