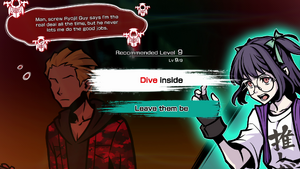 Using Dive will initiate a special Noise battle. This battle will usually have at least 3 Reductions, and will have an overall time limit to complete. In addition, Noise can have special emotion-based powers as listed below.

Dive battles can be retried as normal. They do not drop Pins, but defeating a Dive battle will award Friendship Points based on how quickly the battle was completed.

Usually, only one type of emotion noise will appear in each Reduction, with the graphical tint and musical theme indicating which it is.

These are Dives that while part of the story are optional and do not need to be completed for progression.

Dive in the opening