The World Ends With You
Register
Don't have an account?
Sign In
Advertisement
in: Article stubs, Locations 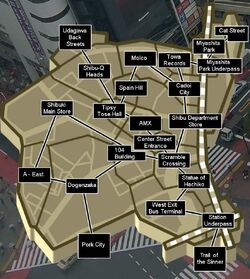 A district is a part of the in-game Shibuya map structure. Characters can always move freely around a single district, but moving to a different district is allowed only if:

In the original game, each district ranked brands in a certain order. The rank affects the power of different pins in-battle, and is constantly changing (see Brand for details).

Appears in Every Game[]

"Shibuya's scramble crossing, the most famous of its kind in the world. The giant TV screens gracing the buildings are a sight to behold."

In both games, the Reapers' Game begins in this district and it is the most common location to wake up in when a new day begins. It primarily serves as a point to reach other districts of Shibuya.

While in-game, it is small in size and has few quests throughout the gameplay, 104 Building is one of the more popular locations the player will find themselves due to the shops present. In NEO, it is the location of the Gatto Nero store.

Corresponds to Shibuya 109 in reality. 104 is one of the few cases where a building in Shibuya was not renamed to its real-life name in later games, as it was considered an iconic part of the game.

"A record store born in the US of A. Currently, the store's collaboration with the artist "CAT" is creating a buzz."

Tower Records is the name of the district and the store. The store itself specializes in selling CDs of the game's soundtrack.

In the original game, it was named Towa Records.

"A swath of precious green maintained by Shibuya's government. While a place of repose, the park is also beginning to show a slummier side."

In the original game, the park was a walkway to get to Cat Street. In NEO, it had been renovated with more greenery and a shop.

"A street lined with cafés, imported furniture stores, and other classy establishments. Neighboring Harajuku Station might get you there quicker."

A district most well known for being the location of Sanae Hanekoma's cafe, Wildkat. It is one of the furthest points in the map in the original game.

"A sloping street flanked by shops tending toward the eccentric. Once, this hill was a popular setting for novels."

Dogenzaka is a shopping street with a focus on restaurants. In both games, it features a restaurant owned and ran by Ken Doi.

"One of Shibuya's shadier neighborhoods. The street winds past "live houses" (concert spaces) and gothic-lolita boutiques."

O-East is a music venue. It features a concert stage and was the location of Def Märch's concerts in the original game.

In the original game, it was named A-East.

"A stomping ground for Shibuya youth. In the 80s, it gave birth to the "Shibu-Kaji" (Shibuya Casuals) fashion movement."

Center Street is a thin road extending from the Scramble Crossing. In NEO, it features a number of stores and restaurants. In the original game, it was named Center Street Entrance and was nothing more than a small street, not featuring any stores or restaurants. Those other locations mostly occupied their own districts.

"A popular corner whose arcade and karaoke boxes draw crowds. There's even a store specializing in American comics."

Tipsy Tose Hall is a location known for being a place to play Tin Pin later in-game at the Stride arcade. In NEO, it features Tokyu Hands which previously occupied its own district in the original game.

"A narrow, Mediterranean street lined with eateries, bookshops, and more. As you climb the stone-paved steps, you'll want to veer off and explore."

A street on a hill known for featuring the restaurant Mexican Dog in the original game. In NEO, it also includes the Parco building.

"A terminal served by most Tokyo bus lines. Normally, this is your ticket all over the city."

The West Exist Bus Terminal is one of the most westside districts. Its prominent landmark is the Moyai statue. In the original game, going in this direction would eventually lead to the Shibuya River. By the time of NEO, it had been moved to the Shibuya Stream.

"A graffiti ward of punks and underground rebels, Udagawa is no place for little kids. This dark backstreet is suited for only the toughest of men."

Udagawa is a graffiti mass, while also being a plot-heavy location revealed in the original game. The most iconic feature of the district is the large mural painted by CAT.

It also features the Cyco Records store, corresponding to Cisco Records, which closed in December 2007. This was after the original game came out in Japan but before the English language localization. Regardless, the record store is still present in NEO.

The World Ends with You Exclusive[]

"An area located right next to the train station that holds the Statue of Hachiko, one of the most notable symbols of Shibuya. This are is also known for being a popular meet-up location, especially among young couples."

In the original game, this district is where Neku makes the pacts with all of his partners. During Week 1, the statue houses a Noise that must be erased in order for a specific mission to be accomplished. The Shibukyu Stationside stores are located here. It is linked to the Scramble Crossing and the West Exit Bus Terminal.

In NEO, the Statue of Hachiko is not a separate location, but a part of the larger Scramble Crossing district.

Many of the more expensive brand items and threads are found here. The location is useful for obtaining exceptional stat-giving food, such as Ginseng or Cordyceps or the special Curious Mushrooms.

"One of Japan's department store chains. While the focus is on fashion, they also sell furniture and jewelry."

Cadoi City is a cross-way the player may go through when trying to get to Cat Street, Molco or the Scramble Crossing. It features many budget clothing options like the Mus Rattus and Natural Puppy stores.

In NEO, it has become merged with the Tower Records district.

Corresponds to Marui City in reality.

"A tunnel beneath the Yamanote train-line that circles central Tokyo. The graffiti inside never stays the same for long."

A dull-colored underpass that is required to pass in order to reach Cat Street. The location holds emotional significance to Beat.

"A department store that targets the family demographic. The secret of its popularity is a wide range of tenants."

While one of the least visited locations by Neku, Shibukyu Main Store houses both the simple Mus Rattus brand and the detail-orientated Dragon Couture brand. Because this district holds the Dragon Couture's main brand store, it is usually the most popular brand around.

"A major Japanese CD store on Center Street. Nearby you can find show stores, lingerie shops, and other clothing boutiques."

"A chain store that sells pretty much anything, including seasonal and party goods as well as collector items. They even have a drugstore."

Shibu-Q Heads is a system of stores most known for quest items and pins, as well as stat raising medicines from its pharmacy. All of its floors apart from the pharmacy returned in NEO but were merged with the Tipsy Tose Hall district. The building was renamed to reflect its title in reality, Tokyu Hands.

"A series of department store buildings centered around teen and twenty-something fashion. Don't miss the exhibition space for a dose of pop culture."

A large district that gives access to D+B's main store, along with an assortment of other interesting brands such as Tigre Punks and Sheep Heavenly.

The building returned in NEO, but was merged with the Spain Hill district. It was renamed to reflect its name in reality, Parco.

"A tunnel beneath the train tracks. The eerie graffiti and gloomy atmosphere keep people away despite its proximity to the station."

The dark Station Underpass is an ominous location that acted as the entrance to the Shibuya River.

"A tall building located near Dogenzaka, it is split into two buildings: the East as a hotel and the West for offices. It was built to attract the attention of women."

Named Pork City in the original game, Mark City is a special location. It has been stated to be where stray thoughts flow. The battles within the building take place in the imaginary number plane instead of the Noise plane and only one brand of pins work on each floor. There are thirteen floors explorable in the game, each one representing one of the thirteen brands.

While never visited, the building still appears in the background in NEO.

The Shibuya river is a special area accessed late in the game to end the Reapers' Game. Parts of it include CAT's graffiti. In the original game, it was accessed from the Station Underpass, but in the time of The Animation and NEO, the location had been moved to the Shibuya Stream.

It is not one district but a series of smaller locations. They are as follows:

The Dead God's Pad is the Reapers' official headquarters located within the Shibuya River. It is a trendy hangout made up of a glass aquarium floor, a personal bar, a jukebox, white sofas, and a waterfall glass.

The Room of Reckoning is the end of the Shibuya River area. This ominous room is seemingly the "home" of the composer, as it houses the throne of Shibuya.

NEO: The World Ends with You Exclusive[]

This article is a stub. You can help The World Ends with You Wiki by expanding it.
Be sure to check the Manual of Style before editing the article.

Shibuya Hikarie is a district that connects to the Scramble Crossing. It is primarily used to access the Expressway Underpass and the Shibuya Stream.

The Expressway Underpass is a circular bridge in between Shibuya Hikarie and the Shibuya Stream. It is the location of Ryoji's shop.

The Shibuya Stream is a small plaza that acts as the entrance to the Shibuya River. This is how the river is accessed in NEO as well as The Animation. Unlike the original game, the location does not bare much significance to the story.

Tokyu Plaza is a large square that bridges Shibuya and Harajuku. It is the location of the Il Cavallo Del Re store.

Takeshiti Street is a district located within Harajuku. It is a bustling shopping street known for an emphasis on Kawaii culture.