"What an unpleasant surprise. Come to ingratiate us again with your ill-gotten intel?"

Ayano Kamachi (蒲池 菖乃, Kamachi Ayano) is a Reaper in NEO: The World Ends with You, and is one of the elite Shinjuku Reapers.

Ayano is a woman with long black hair, teal eyes with magenta eyeshadow and thick lips with pink lipstick. She wears a grey blouse opened to show some cleavage. The blouse has teal lines and a floral pattern. She seems to wear either a black miniskirt or short shorts. She accessorizes with a necklace, as well as bracelets and rings on her left arm. Her fingernails are also quite long and her toenails are painted teal. She wears beige open-toe high heels. She has a pet iguana who rides on her shoulders. She is described by Shoka Sakurane as having a "mean RBF" (resting bitch face).

Ayano is highly capable and trusted by her leader, Shiba Miyakaze. She is cold and ruthless towards almost all the Reapers below her except for Shoka, whom she loves like a younger sister. Her pet iguana is even named Shoka after her, a fact that no one but Ayano knows.

However, her love for Shoka is a weakness that Shiba takes advantage of by Week 3, Day 2. Ayano was so distraught by Shoka choosing to save Shibuya and leave the Reapers for good, that per Shiba's suggestion, she chose to be infected and possessed by Plague Noise to make Shoka choose between Ayano or the Wicked Twisters.

Around four years before the events of NEO, Ayano was an elite Reaper working in Shinjuku. Shoka mentions that Ayano was a Reaper for a much longer time than herself. Shoka, a survivor of a Reapers' Game, chose to become a Reaper. At Shiba's request, Ayano taught Shoka her Reaperly duties. Over time, Shoka and Ayano became very close, with Ayano even naming her iguana after her.

When Shinjuku was Inverted, Ayano was deeply distressed, perhaps even traumatized, by all of her Reaper friends who did not survive, causing Ayano to latch onto Shoka even more. Unlike Shoka, who ultimately preferred Shibuya over Shinjuku, Ayano found it very hard to adjust, even once claiming she hated Shibuya.

Ayano first appears at the end of Week 1, Day 2 (NEO), having a conversation with Shoka, Shiba, and Tanzo Kubo about the "new recruit". She is seen at the end of various Days throughout Weeks 1 and 2 afterwards. She does not have an active role in the Reapers' Game until the end of Week 2 and onwards. On Week 2, Day 7, Ayano begs Shoka to rejoin the Reapers, but Shoka refuses.

On Week 3, Day 2, Shiba has Ayano infected and possessed by a Plague Noise. The Wicked Twisters find Ayano at Miyashita Park. Shoka believes Ayano can be saved, but it is already far too late, as Nagi's Dive cannot free Ayano from the Noise. Rindo Kanade decides that defeating Ayano is their only option, and uses his Replay ability to help Shoka realize that they must fight Ayano. Through multiple Replays, Rindo learns more about Shoka and Ayano, and at the end of his last Replay for the day, encourages Shoka to fight. Ayano fights the group in her Noise form, Iris Cantus, although she ends up defeated and is erased.

On Week 3, Day 5, remnants and lingering memories of Ayano's soul in the UG take the form of a Noise created by Shiba, although as Nagi notes, it is an empty husk with no soul. The Wicked Twisters defeat it as part of their mission.

In the Another Day timeline of NEO, Shoka and Ayano are actual sisters, and Ayano is one of the people running the Reapers' Romp. In this timeline, Ayano's pet iguana (which is named Iggy instead) belongs to Shoka instead, but Ayano keeps taking Iggy for herself.

Ayano (菖乃) is from iris flower and the archaic possessive particle 乃 (written as の in modern Japanese).

Kamachi (蒲池) is made up of the kanji for bullrush and pond, giving the imagery of cattails at the edge of a pond. 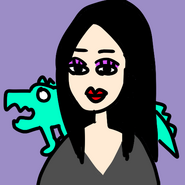